His Amazing Skill with the Ball

Born to a Chilean father and an Italian mother, Jayzinho, known as JZ, is an idol of thousands of young people in the world, for his ability with the soccer ball. “As a child I used to train with my soccer ball between five and six hours a day, I started playing at the age of three and professionally at the age of 17. I played in France, two and a half years, in Chile, and for the U20 Canada National Team”, Jayzinho commented before starting his training session at J10 in Miami. “Ronaldinho was my idol, he did many tricks and had a great style. Before training I did many tricks with my foot on the ball”. Jayzinho became so good that Adidas signed him and gave him a Free Style contract to travel and give demonstrations all over the world. Also, he became the number one in free style. 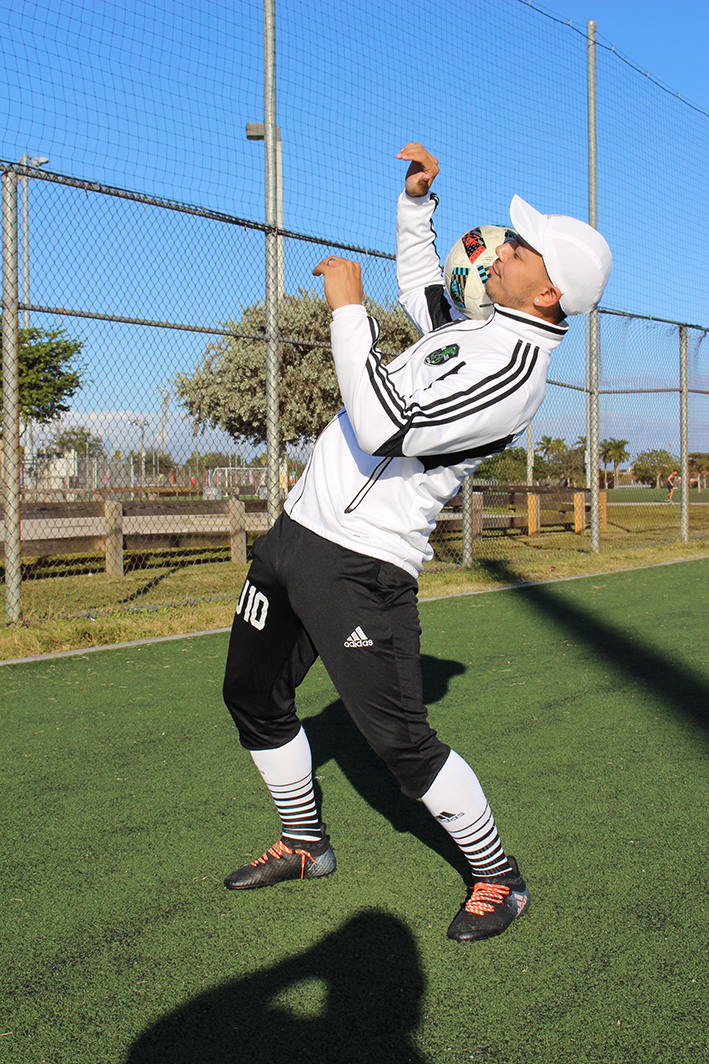 More Success
After that event, EA SPORTS asked him to make a well-known video game called FIFA STREET with JZ’s moves. In the production they had him wear a suit with sensors that recorded all of his movements in order to use them in the game. They also gave him his own character in the game. This video game became the most sold in Europe and the third worldwide. His movements are also in FIFA 2013. “Additionally, from this experience, I was able to meet Barcelona star Leonel Messi since he would be on the cover of the video game,” says JZ with pride. “It was one of the best moments of my life. The most incredible thing was to see how humble Messi is”, he remarks, “I said thank you for giving so many beautiful moments to the world soccer”. Then he gave me a hug and said, “thank you for giving me this big moment”, because he also wanted to meet me.

To achieve the dreams
For JZ, the key to success is a lot of work. “I was crazy about soccer. Once I was playing in my backyard, I made a video and it went viral all over the world. Thanks to the ability that I developed spending hours and hours training with the ball, I became known and I now travel around the world giving demonstrations. For me, it is very inspiring when kids contact me to say that I did something useful for their lives. That I changed their lives in a positive way”, says JZ.

Constant Work
During the summer Jayzinho tours with the Cheetos and Adidas brands. “I’m going to release many videos on my channel because a lot of fans are asking me to. For next year a new video game is expected with EA”.

Soccer Academy
“My passion right now is my Academy. It’s my life; I love it with all my heart. I love watching the kids’ progress. There is nothing better than to see how kids improve and fulfill their goals”, JZ explains about the soccer academy that he directs in Miami, J10. “I received a call from a girl who was with us for three years, she was crying with joy because she received a scholarship to study at FIU. She is a girl who suffered a cruciate ligament twice, and this affects you a lot physically and mentally. And yet she achieved her goal. What we do is very different, I combine what I learned in France and Chile”.

Florida’s Soccer
JZ has a very clear opinion about the development of soccer in Florida: “It is a very rigid game, they look like robots, where there is no creativity. There is no game style, like Argentine or Brazilian style. Here, they do not play with that one-on-one ability. We need more players like Neymar or Ronaldinho, Messi, Cristiano Ronaldo”, he says. What these players have is developed through training and this is what we do here at J10 Academy, we focus on technique and in one-on-one ability. It is necessary to give the kids more confidence, more freedom on the field, because soccer comes from inside the player”. He finishes saying “there is the coach who guides and brings direction, but I think the player should be given some freedom”.

Smaller is better
I grew up in a futsal environment. I did not see the big court until I was 9 years old. That really happens in Chile, Argentina, and Brazil; very talented, super technical players are formed there, who play in small spaces, play faster, so when they reach the big court is easier for them.

Tips for the kids
JZ says it’s always best to play on the street, on the beach, on the grass or anywhere. Be always with the ball. If a kid wants to succeed in soccer, he must be 24 hours a day with the ball. Make the ball be your best friend.

Before a demonstration
Before going on stage, JZ prays to God, “because dominating the ball when you are alone is easy, but when you have to do it in a stadium in front of 90 thousand people who have great expectations about what you are going to do, that is something else”, he says. “When I go on stage, I only see the ball and I see nothing more than that.”