Bill Fisher speaks slowly and with conviction. Every word, every phrase is a declaration of principles. The man who declares his taste for the Bible and Jason Bourne movies, bears on his shoulders the enormous responsibility of creating and developing the best soccer tournaments. A specialty, that from his office in Delray Beach, makes it possible for hundreds of players and clubs to have the opportunity to show their quality every year and to support soccer development in South Florida. These are his ideas and vision: 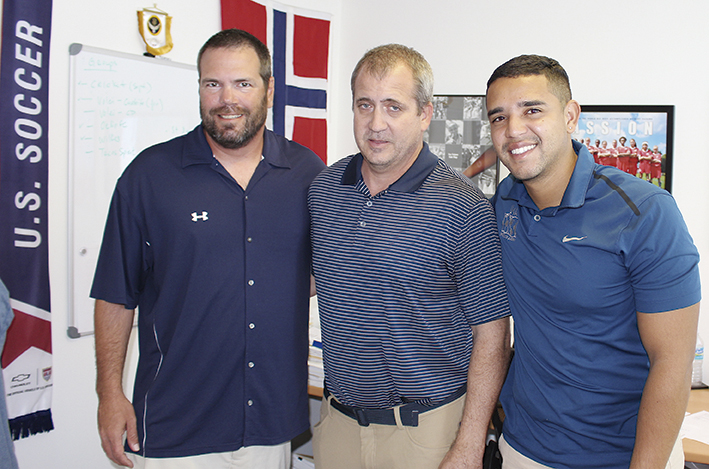 How did you become involved in soccer?
I grew up playing soccer for the East-West soccer club in Cleveland. It was one of the mega clubs at that time. As a young player I had the opportunity of traveling all over the world. Thirty years ago, it was a big thing for an American kid to travel abroad, now kids have this opportunity all the time. At 20, I was playing college soccer at Cleveland state. Later on, we formed a program that allowed teams and players to travel abroad, for the last 25 years we have been taking players to Europe and South America. Through this program we started working with clubs on helping them organize their tournaments. Additionally, with our international program we have established a soccer university, which is a placement program where we help international players to come to the U.S. to play soccer.

How many tournaments do you manage in a year?
We manage 12 tournaments a year in South Florida and Orlando. We work with Florida Rush, Weston FC and West Pines. In the last couple of years we have helped establish tournaments for Miramar and Davie Sharks. We also have our own United soccer cup. These club tournaments are important for the clubs in terms of branding and exposure.

How many teams are expected to participate in the next Weston Showcase?
The last couple of years we´ve had around 600 to 700 teams. We expect to have around 700 teams this time. The Weston Cup is the biggest tournament in Florida and it is definitely one of the top 10 tournaments in the U.S.

Which countries do participants come from?
They come from the Caribbean, Canada, South America and every once in a while, we get teams from Scandinavia.

How many people work with you?
We have an office of 4 full-time staff members. Running a tournament is not a one-man show, you need to have the right team and right partners within the city. We are working with professional youth clubs. The relationships we have with the clubs are key for these events.

What do you think about the new soccer standards?
It should have been done 10 years ago, the build up line, encouraging teams to play out of the back and birth-year registration are the right things to do. The heading, I don’t know so much about that. Ultimately, these changes will help the U.S. soccer development

What is your opinion about the growth of South Florida’s female soccer?
It is definitely passionate, girls clubs are improving. The clubs provide their players with national level competition and great playing experiences. It does feel good to play, it is more important to have quality matches even if you get fewer of them.

What are your thoughts on the coaches’ level?
The level is very good. Most importantly, we need our best coaches at the younger ages. In general, we need to do a better job with our younger coaches in terms of coaching level, and player development.

Do you think there has to be more commitment to sponsoring sports programs?
That is another area where things could be done with a little bit more professionalism. There should be more corporate involvements. There is some involvement but the next step is to be able to generate better sponsorship through companies that can help with player development facilities.

What is the parents´ role in soccer?
This generation of parents seems to be too protective. We are starting to see parents who are ruining the game for their son or daughter. They have to keep in perspective that the main purpose is to enjoy the game, to grow and get better, make friendships, to learn how to compete, and to deal with a little bit of adversity.

What are your goals for the upcoming years?
We continue with the tournaments, providing a better service. Our international program is always growing. There are teams interested in going overseas. Over the years, soccer´s reputation in the U.S. has gotten better. Teams are coming to the U.S. to get quality matches. There are plenty of kids overseas who are interested in coming to the United States to get an education and play college soccer.

According to the U.S. Soccer Federation, there will be no standings or champions for younger ages, how will this affect the children’s performance?
Teams and players are competitive, whether you give them a trophee or a medal at the end of the event, it really doesn’t matter. They all want to compete, coaches need to do a better job realizing that it is not about winning or losing but developing players.

What do think you can improve in the work you do?
The biggest challenge are the referees. If you think it is bad now, it is going to be worse 5 years from now. There is so much emphasis on coaching education, player development, and there is no emphasis on referee development. Clubs like Weston, West Pines, Florida Rush take ownership of referee development by establishing young referee programs in their clubs. We need referees that have played the game and understand it at a decent level.

Is soccer in the U.S. not on the same level as European soccer?
It is a big country that we are dealing with and it’s still a young sport. If we were the size of Italy, Holland or Denmark, it would be a lot easier to implement player development, identification and coaching philosophy. But on the other hand, with such a big country, Italy can produce 15 world-class players and the U.S. should be able to produce 150. It all comes down to having a better structure at the youth level, encouraging players to be creative and taking chances.

How was the transition from playing soccer to organizing tournaments?
It is definitely interesting to see both aspects of the game. I have been involved in soccer since I was 4 years old. I am now seeing the other side of soccer: tournament aspects and how to run a tournament successfully. Soccer is getting bigger, when I was in Weston we didn’t have a Development Academy, it would have been nice to have that opportunity. We were going to high level tournaments, we travelled all over the world to go to tournaments but now kids have more opportunities.

What advice would you give to kids who are pursuing a soccer career?
I would say it is all about commitment. Becoming a professional soccer player is something very few are able to achieve. There are a lot of sacrifices in this career. You are going to have to give up spending time with friends, going to certain events and going to birthday parties. It is the most popular sport in the world and as you are sitting in bed watching T.V., there is another kid on the other side of the country who is training and running and pursuing that dream.

What are your goals for the future?
I had the dream of becoming a professional soccer player; I had the chance to do it. I was in Argentina when I was 16 years old. The day before I had to come back to the U.S., a club wanted to sign me. I decided that I needed to go back to school and finish my high school. I continued to play soccer, but it was never the same. It is important to keep moving forward and being able to provide kids the experience that I was able to live. I had the opportunity to play in some of the world’s biggest tournaments. My future goal would be to provide and give kids something that I was able to live and had an absolutely amazing experience.