The FBS-FC is a Miami’s club with a clear vision about soccer, family, and its purpose as a sporting organization. With a great team of professional coaches, the Elite program is a pilot project whose purpose is to start an Academy with more competitive teams. It is a high-level team, which has delivered its first results by reaching the finals at the recent “State Cup 2016”.

This team that started over a month ago, will participate in different tournaments and travel more than other teams. “The kids on this team know that they have a greater commitment than the others”. Coach Cristian Morales says. “At our Academy all the teams get standard training; instead, the Elite Team trains four times a week, rests on Friday, and plays a tournament on the weekend. Definitively, it is a greater commitment.” Cristian also considers the parent’s support is very important because time is needed for training and to meet the schedules. 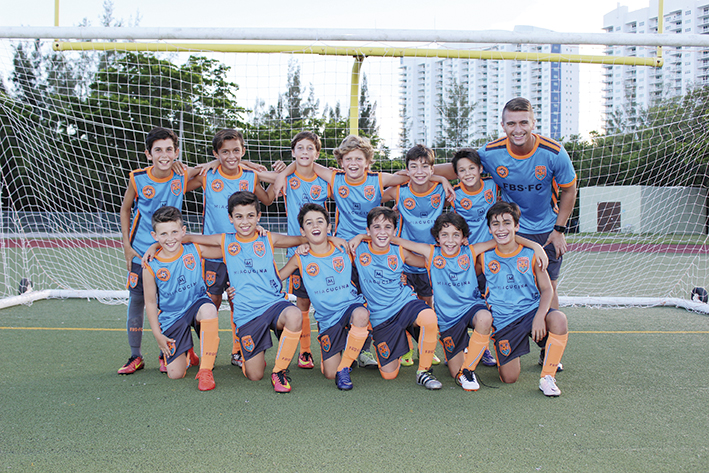 Another wager by the club that is led by President Francis Farberoff and Director of Coaching Oscar Gil, which continues to grow at higher levels and total commitment with the families and players.

David Dickstein
“I was invited to play in Medellín, Colombia. It was a great experience, the kids over there were very talented and I learned a lot.”

Three FBS-FC players were invited to the U.S. Soccer Training Camp in Davie, Florida. The U14 players, Leon Sion and Isaac Manelis, and Devin Derival from U15, were chosen due to their excellent performance, capability and commitment.

“I am very honored to have this great opportunity to participate in the U.S. training camp”
Leon Sion

“It is an honor for me to have been invited, the level is very high and I learned a lot”
Devin Derival

“As long as I can remember, I was always kicking a ball”

Ever Antonio Palacios, better known as “Chaca”, is a new coach who has recently joined FBS-FC. He was a member of the Colombia Nationa Soccer Team at the 1998 FIFA World Cup and has played for great teams in Colombia, Ecuador and Japan, “Chaca” studied during a time in Sao Paulo where he recievied the “A” license. He also studied in Argentina.

How do you feel with the FBS-FC boys?
So far, it’s going really well. Little by little, we hope to raise their game to the next level. I’ve just arrived from Colombia, I’m adjusting to life in Miami.

What is missing in Florida’s soccer?
Passion to play, and that kids realize soccer can be a life choice. Furthermore, soccer is fun and can be character building. So that even if you don’t get a good athlete out of it, you’ll get a great person.

What do you think about the new FYSA rules?
I think there are rules in every place and they must be respected.

What is your favorite memory as a professional soccer player?
The 1998 FIFA World Cup in France. It is like graduation for a soccer player. It is something unique.

“With discipline you can go a long way”