Jesus Purizaga, who earned the nickname of “El Gato” for his cat-like movements in his position as goalkeeper.

“El Gato” is a charismatic man, with a great sense of humor, cheerful and kind, who enjoys working with kids to shape them into good children, good students and therefore good athletes. 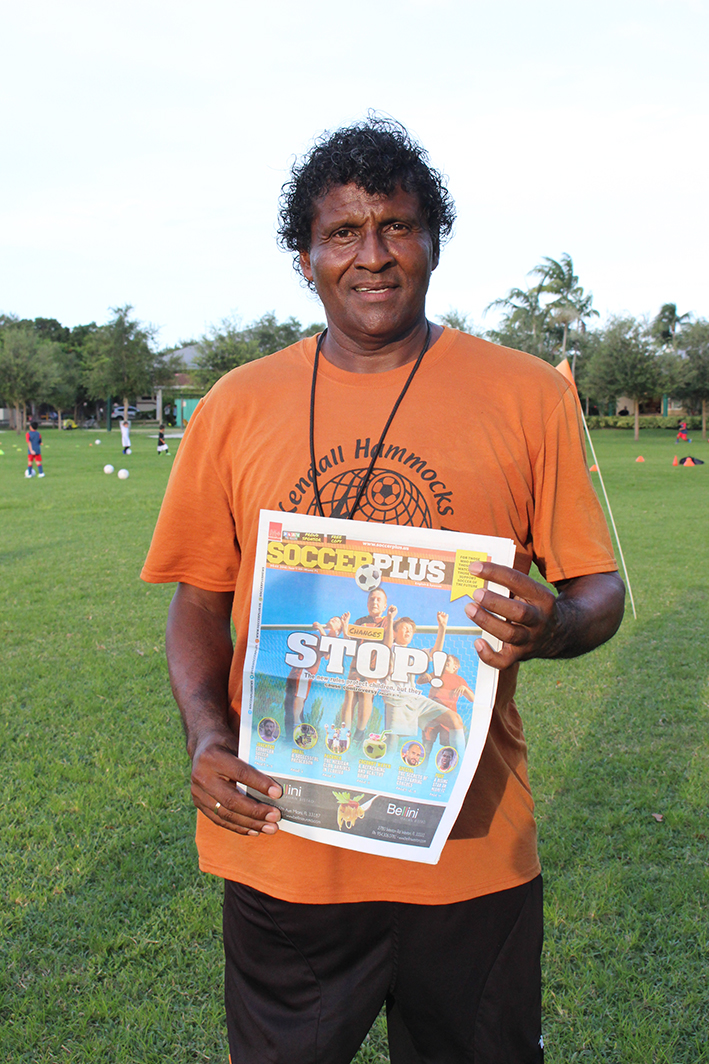 “El Gato” works with kids from different clubs who want to improve their individual performance, “everything is achieved through perseverance and consistency”, he says. “I’m not interested in whether they have 500 medals. What I want is for them to have a chance to go to college someday”, he remarks while moving his hands.

What progress have you seen in South Florida’s soccer since your arrival?
Most of the fields used to be for baseball until the arrival of Kendall Soccer Park. Over the last ten years, there are more soccer academies, soccer fields, and most of the boys and girls are of Latin American descent.

What do you think is the contribution of Latin American coaches who have come to work in Miami?
I have worked in the development of young individuals. There are two boys who are currently doing very well in soccer. One of them is playing for the English league second division and the other one is leaving to play for a Chelsea’s subsidiary team also in England.

What positions are you training the kids to play?
I coach all soccer positions. I also have a group only for goalkeepers.

Is being a keeper the hardest position on the field?
Yes, it’s the hardest, most unrewarding position. I’ve lived it, the goalkeeper is the crazy optimistic of the group. For instance, when a goal is scored, the goalkeeper can’t celebrate with his teammates. So he has to celebrate and scream by himself. On the other hand, a keeper can make numerous excellent saves during 89 minutes yet his one and only blunder makes him the villain.

What does it take to play as a goalie?
First of all, you must like being a goalie, must be willing to defend the team’s goal. In my case, I started out playing in goal at the age of 14. I was actually a forward, but I ended up between the posts.

What memories do you have from your professional career?
I have many good memories. From each team, I have a memory in my heart, but the one I feel deep in my heart, in my very blood, is UTC CAJAMARCA. The team gave me my first opportunity to succeed in life and buy a house for my wife and kids.

What is the key for success in soccer?
This is a country of opportunities. When I coach children, I don’t tell the parents his kid will end up playing for Real Madrid. We make progress once step at a time. A little kid must first make the team in middle shcool, then later in high school, and finally in college and once he has received his degree, he may start his soccer career.

“I tell my kids that soccer is like going to a party where you have fun, dance with the ball, but you have to do it responsibly”